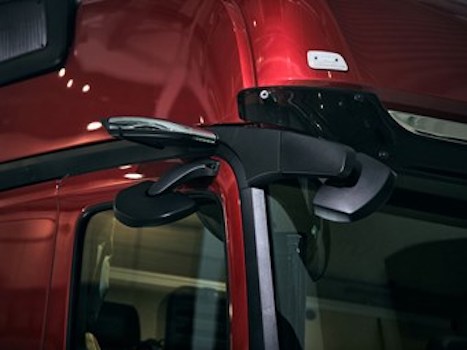 Mercedes-Benz Trucks has announced it is already launching the second generation of its MirrorCam, with new improvements being added to the system.

The camera arms will now be 10 centimetres shorter on each side, while new image parameters will provide for better support for drivers in many road traffic situations.

An enhanced housing design will further reduce the camera lens debris, while the mirror technology will now offer a more realistic illustration of the environment alongside improved image information.

"The intensive discussions with our customers and their experiences from day-to-day operations formed the foundations for us to make further adjustments to individual technical parameters, thereby generating even greater added value in terms of display and safety," Mercedes-Benz Trucks head of product development Uwe Baake says.

Mercedes-Benz Trucks first presented a heavy vehicle with cameras instead of exterior outside mirrors back in 2014.

In 2018 it became the first in the industry to introduce a series production of MirrorCam, which was the first mirror camera system for trucks.

In this system, two cameras attach to both sides of the roof frame as well as two portrait-format monitors installed in the A-pillars of the cab.

The decision to introduce two 15-inch monitors on the driver’s and front passenger’s sides was done to better judge the speed of passing objects around the truck.